Interface is a not for profit organisation, run by the founder and director Alannah Robins and reporting to a board. 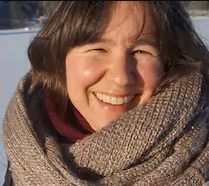 Alannah has won several commissions and awards for her artwork in Ireland and Sweden, including a public commission for the Waterford Institute of Technology, Tyresö Kulturstipendium and Helge Axeson stipend. She has exhibited widely, amongst other places, in the Royal Hibernian Academy, Dublin, London’s Dialogue Cultural Space and in Sweden, in Tegen2, Detroit Stockholm and Kiruna Stadshus. Recent exhibitions include Carrying the Songs, Detroit Stockholm; The Half Light, Pasaj, Istanbul and Bach in the Water, with Cecilia Josefson, Galleri CC, Malmö.